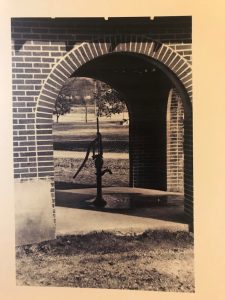 The history of Powder Springs is the history of the relationship between the people and the seven spring located here. The area was originally part of the Cherokee Indian Nation. These seven springs were well known to Indians. The Cherokee and Creek called the site Gunpowder Springs because of the mineral bearing Sulfur and blackish sediment in the springs. The sediment was said to be ‘as dry as powder when the water runoff’. The Indians used the water of the springs for medicinal value. They would bring their sick to the springs to take advantage of the curative power of the minerals.

Pioneers, or white settlers, began settling the area as early as 1819. The village became a center for commerce. The springs were the town’s water supply.

The water table is very near the surface and there are many springs. All of the springs are small and none of them furnishing more than a gallon a minute.