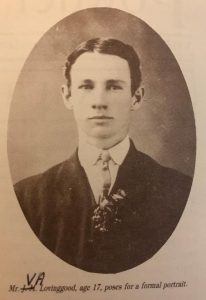 In 1910, V. A. Lovinggood moved to Powder Springs with his bride who had left her position as stenographer with Uncle Remus Magazine in Atlanta to establish a home. Mr. Lovinggood recounts with a smile his wife’s singing ability and trips to attend the singing school which was located near Powder Springs. In addition to being a fine singer, Mr. Lovinggood remembers that his wife was the “biggest talker in the world.” In 1918 the couple purchased sixty acres of farmland near Powder Springs for $3,600, reportedly the highest price ever paid for land in the area. (A half-acre parcel of the same land recently sold for $3,500.) With his farm prospering, Mr. Lovinggood was presented the opportunity to purchase a store in Powder Springs. Reluctantly at first, Mr. Lovinggood, with the help of his father and his brother Albert, bought the store. Gradually, the store occupied greater and greater attention and Mr. Lovinggood operated it actively until 1970.

Always a farmer, Mr. Lovinggood raised much of the produce and livestock that maintained both his table and his storeroom. His memories include some of the hardest times in this country’s history and he tells of feeding people who came to him crying for bread during the Depression. At one point in 1930, cotton, which had been the major money crop of this and many other farming communities throughout the South, sold for 5 cents per pound. Mr. Lovinggood remembers speculating on some 12-14 bales at 5 cents per pound and later selling the cotton to a broker for 10 cents per pound. High finance was very limited for merchants during this time.

Such crops as peaches and tomatoes were attempted after the destruction of cotton by the boll weevil. Although relatively unsuccessful, the attempts did lead to such enterprises as the cultivation of sorghum and the resulting grinding and preparation of syrup. Describing himself as “born and raised in a syrup mill”, Mr. Lovinggood and his family operated a sorghum mill which handled the needs of farmers from many miles around. Even a relatively successful enterprise like the sorghum mill was limited by modern standards. The syrup, ground by a mule-drawn mill and boiled in huge open vats to thicken the sweet juice, sold to Atlanta wholesale distributors for only 35 cents per gallon. Mr. Lovinggood also sold the syrup in his store.

But perhaps Mr. Lovinggood’s most vivid memories are of the cotton gins, both the Farmer’s Co-op and McTyre’s, which were in major enterprises in the community, rivaled only by the railroad section crews in economic importance. When the cotton crop was ready for ginning, Mr. Lovinggood would open his store at 1:00 A.M. in order to serve the farmers who would line up their wagons, loaded with as much as 40 bales of cotton, along the main street of Powder Springs. He remembers the day that an electrical short at one gin affected the power source at the other gin and resulted in a brace of mules owned by a Mr. Wade to be electrocuted as they waited to deposit their load of cotton.

As a store owner in Powder Springs for almost 50 years, Mr. Lovinggood recalls much of the commercial activity of the town. He remembers the sound of anvils ringing in the early morning air from the three blacksmith shops that thrived before the automobile became common. As a young merchant on a trip to Atlanta, he describes the deserted streets surrounding the Henry Grady monument that still stands on Marietta Street near Five Points; there were no cars in sight and he observed a grand total of eleven motor vehicles on the streets of Atlanta that day. The hard times of the 20’s and 30’s meant people could not pay for their basic needs. Mr. Lovinggood remembers one family who did pay him $10.35 for a crate of eggs and a bushel of potatoes — he got the check 35 years after the merchandise was sold. He sold 25 lbs. of flour for 75 cents back then and bought 100 cases of a new but very popular product from a broker in Atlanta at 85 cents per case. Coke has gotten more popular, and more expensive since then.

Mr. Lovinggood remembers, perhaps not a better time, but certainly a time from which modern society can learn much. He has preserved the memories of that time in carefully maintained records: photographs, the ledger books from his store, even the letters written to him by his second wife prior to their marriage. He intends to take those letters with him to his grave. Thankfully, he has taken the time to share his memories and insights with us.

Thank you Mr. Lovinggood for the loving memories.