The Powder Springs Elementary School will celebrate its 30th anniversary in October at this location on Grady Grier Drive. 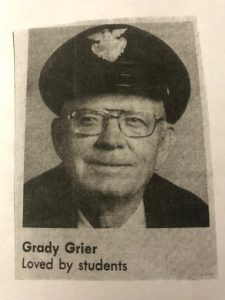 For 15 years Grady Grier braved the elements as a school crossing guard, helping the children of Powder Springs and Milford arrive safely at school and home again.

In recognition of his service to the people of Powder Springs, the Powder Springs City Council announced last week that the new street leading to the new Powder Springs Elementary School from Old Austell Road will be named Grady Grier Drive in his honor.

“I think that’s the most appropriate to name the street after him,” said Murray Barber, assistant superintendent for elementary operations for the Cobb County Public Schools.

Barber was principal of Tapp Middle School from 1975-1981, while Grier served as crossing guard. He knew Grier for almost 30 years as a fellow member of the First Baptist Church of Powder Springs before Grier’s death in 1985.

“He was a real friend to the students,” said Barber. “The kids loved him.”

Grier was often on hand at student orientations, even though not required, directing traffic and making himself available to meet parents.

Originally from Cherokee County, Grier worked 35 years at the old Whittier Mills in Atlanta. They moved to Powder Springs in 1956.

Grier drove a school bus for three years in Powder Springs and served as a school crossing guard from April 1969 to 1976 at Milford Elementary School then at Tapp Middle School from 1976 until shortly before his death.

Grier was known as a man who loved people and was always actively involved with his church, the school and with the job of living in general, said Barber. He had a strong faith in God and was always kind and thoughtful.

“He was a person who encouraged others,” said Barber. “One of his favorite pastimes was to call people on the telephone on his or her birthday and, after a brief hello, he played happy birthday to them on the harmonica.”

“Grady Grier’s faith was an inspiration to many,” said Barber.

Grier joined the First Baptist Church of Powder Springs in the late 1950’s, taught Sunday school, sang in the choir, was a deacon and was involved with the senior citizens’ group.

The Rev. Michael Woods of First Baptist, who came to Powder Springs in 1981, remembers him as a man who seemed much younger than his age, he said. In fact, he practiced in the choir the Friday before he died.

“I never knew Grady to say anything ill about anybody,” said Woods. “He was a man of integrity.

Although Grier seldom discussed his faith in God, “He’s one who just liked (his faith) to the fullest,” said Woods. “I never did see him depressed.

Woods considers it appropriate they named a street next to a school after him, he said.

Grier worked at Tapp until March 1984, when he left for medical reasons, but returned that fall. He stayed until November 1984. He died the following March.

At the time of his death in 1985, he also had two daughters-in-law, Ruth and Nellie Ruth, four grandchildren, nine great-grandchildren, and one great-great grandchild. He had one surviving sister, Lena Hill of Acworth.