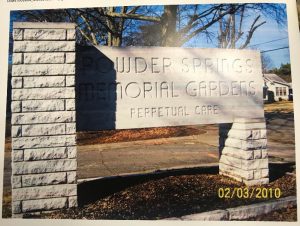 In the Memorial Gardens are buried those who were businessmen and tradesmen in Powder Springs, Cobb County and the surrounding areas. Some were veterans who served in war and peace times. Some were doctors, educators, pastors, mayors, councilmen, baseball players and farmers. There are families of the names Abernathy, Baggett, Brown, Cooper, Croker, Haynie, Hunter, Kellett, Long, Meadows, and Porter.

Powder Springs City Councilmen: Robert Ervin (R.E.) Long Jr. (1932-2009). Mr. Long was also on the board of directors for Austell Gas System for 43 years. He was President of the C&S Bank of Austell. After 45 years of service in the banking industry, he retired from Bank of America. Joseph Paul Bourassa, Sr. (1927-2010). Mr. Bourassa was also a Past Commander for the American Legion Post #294.

Theses are just a few of the Mayors and City Councilmen who may be buried in this cemetery.

Vessie Frances Thomas Geen (1916-2002) was one of the five graduated from the first graduating class of Powder Springs High School in 1934.

James Edward Wilson (1941-2007) established Wilson Air Conditioning Service in 1969. He served in Vietnam and was the recipient of the Purple Heart for his service.

Howard H. Croker (1924-1988) owner Croker Wrecker Company and a used car lot in Powder Springs for many years. He also served in WWII.

Rev. Robert D. Bitterman (1932-2003) was a pastor in Ohio for over 50 years before moving to Powder Springs in 1997. Here he continued working in the missionary evangelist field and pastoral training. Rev. Bitterman was a member of Calvary Baptist Church in Austell.

Stuart B. Powell (1922-2001) a retired City of Atlanta police officer after 30 years of service. He was also a WWII veteran.

Chief David Wilson Hilton (1937-2016) worked for the Atlanta Fire Department 1955-64 and simultaneously as Fire Chief of the Powder Springs Fire Department until 1971 when it was consolidated into the Cobb County Fire Department. Throughout his career he developed and helped develop various safety procedures for the fire departments. He developed the Emergency 911 System, Georgia’s first Fire Education Department, Fire Arson Investigation, implemented Emergency Medical Service for Cobb County, Residential Fire Code with sprinkler system for buildings across the nation and internationally–just to name a few. Chief Hilton received many awards (local and national) through his career for his achievements and accomplishments. Also, through the years he worked with various youth organizations and his church. He was a charter member of Macland Baptist Church. Chief Hilton retired in 1994.

There are also numerous veterans from various wars buried here. There are only a few of those veterans. A “Thank You” always to all our veterans no matter when or how they served their country.

There is a marker for military service in memory of PO Joel Candler Stephens (1943-1968) who was lost at sea approximately 400 miles SW of the Azores eastern edge of Sargasso Sea in 1968.

There are memorial markers throughout the cemetery honoring the lives and families of those buried here in their final resting place. There are also markers honoring the memory of those who, for some reason, could not actually be buried here.

There is an American flag along the entrance to the cemetery. The marker has emblems of the U. S. Military Forces. Below these emblems it reads: ” Flags Flying in Memory of…”

All who are buried here have, in some way, all through their lives, helped make their communities a better place to live for all generations.

The Powder Springs Memorial Garden currently has over 1250 graves. However, there is still more room for future burials today in 2019.

The Memory Gardens is a perpetual care cemetery and is associated with the Sunrise Memorial Gardens in Douglasville.