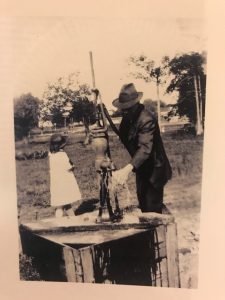 In the 1850s, Powder Springs was a health resort. Doctors prescribed a trip to the springs and treatments of various lengths for patients with serious kidney and bladder diseases, W.R. Tapp, Sr., was told by some of the oldest citizens that there was a hotel and a sanatorium in the park at the spring, that the hotel was destroyed by fire in 1859, and that the sanatorium disappeared in a few years. The Civil War put an end to Powder Springs as a health resort according to an account in the Mableton Mail, July 8, 1961. “The original building was a two-story one at the site of the pump house in the park. It was the town’s club house before the War of 1861 and reconstruction days.” This building could have been the one used as a sanatorium before the hotel burned.

According to Miss Roberta Murray, “In the early days of Springville (Powder Springs) the Pavilion was at the site where the brick pump house now stands in the city park. Powder Creek would overflow after rains and it interfered with the social life so the early settlers and their slaves cut a canal and changed the course of Powder Creek and built the present pavilion before the Civil War.”

From 1880 through the early 1900s, the park and spring attracted groups from neighboring communities and from Atlanta for recreational purposes. School groups, clubs and church groups picnicked then enjoyed the dance pavilion, the ball diamond, wading in the shallow water of Powder Creek and fishing in the deeper holes, horseshoe pitching, picking blackberries and other wild fruits, and spreading their lunches in the shade of the trees. The Southern Railroad ran special excursion trains in the summers, beginning in 1882, to Powder Springs. If the picnickers wanted to go riding around the country side, they could go to the Lindley Livery Stable and rent horses, buggies, carriages and wagons.

Political rallies and family reunions were held at the springs. Wheat Street Baptist Church from Atlanta had a picnic there. Local people had dances, wiener roasts, marshmallow toastings, box suppers, community sings and games of various kinds at the park. On Sunday afternoons the spring was a favorite gathering place for the young ladies and gentlemen of the town.