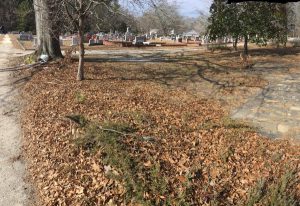 The earliest markers are 1903 and 1905 for Landers Infants (M.A.J. and F.E. Landers) and 1916 Frances E. Landers (1865-1916) w/o M.A.J. Landers. According to family members, these graves were moved actually moved here M.A.J. Landers died in 1954 by his and Frances’ sons, George Landers and Robert (Bob) Landers. (note: information on file with Seven Springs Historical Society, archived at the Seven Springs Museum at the Bodiford House.) 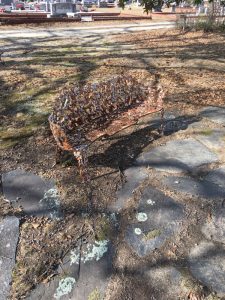 There is a small wooded area with an iron bench, at the front of the cemetery, on Old Austell Road. This area was established in 1978 by the Mimosa Garden Club of Powder Springs. Club Member, Mrs. Faye (Fae) Lindley inspired the Garden Club Members to set this area up as a Mediation Garden for all to enjoy.

In the Powder Springs City Cemetery are buried some of the members of the early families of Powder Springs. There are also those who came later to settle and open businesses, live here and/or live and work in the surrounding counties. Some are Veterans who served in the military during war and piece time. Some are merchants, tradesmen, businessmen, doctors, educators, pastors, mayors, councilmen, baseball players, every day citizens.

Powder Springs City Councilmen: William Buren Turner, Sr. (1917-2003) and a WWII Veteran. Fred Brady (1933-1957) owned furniture store in downtown Powder Springs and Brady’s Grocery Store (located where the shopping center is next door to BP Station at intersection with Powder Springs Road and Austell Powder Springs Road). These are just a few of the Mayors and Councilmen who may be buried in this cemetery.

Frank Picken “Pick” Lindley, Jr. (1917-1985) owner and director of Lindley Funeral Home from 1937 when he took over from his Grandfather until he sold the business in 1968 to Gene Davis. Pick was also a WWII Veteran. The funeral home went through several owners, Marion
Turk, Dennis Bellamy and currently Dwayne Green. Warren Watson “Pinky” Jennings (1915-1998) started work for Lindley Funeral Home in 1936 and stayed throughout all owners until he retired from Bellamy Funeral Home in 1997. Serving for 60 years.

M.A.J. Landers (1865-1954) Matthew Andrew Jackson “Jack” or ‘MAJ” Landers was a businessman, merchant, and Mayor of Powder Springs. He ran a hardware store downtown, a construction company, a feed mill, and an automobile dealership (perhaps the first in Powder Springs). As Mayor he initiated the first city owned water works in 1934 with $12,000 that he backed with his own money. He aided with essential supplies from his store to the City of Gainesville during their recovery after the tornado of 1936 devastated that city.

Virgil A. Lovinggood, Sr. ((1888-1985) was a businessman in downtown who operated Lovinggoods Store for nearly 50 years. He sold all manner of goods and merchandise, never turning away those in need. His family operated a sorghum mill. He was a prosperous farmer prior to purchasing the store and continued to farm. He raised his own produce and livestock. You would find these products – syrup, produce, meat, dairy items and even a new product called “Coke” in his general store.

Earl “Bug” Porter, Jr. (1927-2011) continued to operate Porter’s Garage and Powder Springs Service Station after his father Earl Porter Sr. (1896-1978) passed away. Bug also owned and operated the Powder Springs Lawn Mower Shop. Bug and his service station were a well loved fixture in downtown Powder Springs for many years. He was also a WWII Veteran.

Wallace McSel Pearson (1917-2012) was a contractor, builder and painter who was well known in Powder Springs and the surrounding Counties. He was a Director for 23 years with Greystone Powder Corporation and a WWII Veteran.

Elmer Gladney (E.G.) Wylie, Jr (1926-2012) Powder Springs Businessman, founder of Carter Concrete, Wylie’s Insulation (Rainey Brothers), a builder and contractor. Mr. Wylie was one of the original Directors of the Powder Springs/Cobb County Bank established in 1969. (which has, over time, became part of current day Wells Fargo Bank).He is a Veteran of WWII and Korea – U.S. Army and Air Force.

Aaron Grady Grier (1895-1985) was a man who loved people and was always actively involved with his church, the schools, and was always
kind and thoughtful. Mr. Grier was a school bus driver and school crossing guard for many years. He worked at Powder Springs Elementary School, Tapp Middle School and Milford Elementary School.

In August of 1988, the Powder Springs City Council recognized Mr. Grier’s service to and love of the children and people of Powder Springs by naming the new street leading to the new Powder Springs Elementary School “Grady Grier Drive” in his honor.

Estie Mae Norris (1915-2014) was a long time member of the Seven Springs Historical Society and Museum and the Powder Springs Senior
Citizens Center. Estie was known as the “Quilt Lady” for all the quilts she made or helped make during her lifetime. She made and donated 20 handmade quilts to the used as fund raisers for the Seven Springs Historical Society and Museum. These were usually raffled off in December of each year. She was a hard worker, respected and loved by many people.

William Roy “Bill” Tapp, Jr. (1922-2011) served as an engineering draftsman in 1943 for WWII Bombers. Then, in 1945, as part of an Anti Sub Fleet. By trade Mr. Tapp was an architect for many of the buildings, homes, schools, public/government facilities around and in Atlanta, Fulton County, Cobb County, Douglas County and City of Marietta. Mr. Tapp designed the initial Campus and buildings of the Southern Polytechnic State University, now Kennesaw State University. Mr. Tapp also designed the First Baptist Church of Powder Springs church building in 1964.

Robert Graham Bodiford (1921-2012) moved his family to Powder Springs when he purchased the Queen Anne Style Home on Marietta Street in 1954. He worked at Lockheed as an Aeronautical Engineer. Mr. Bodiford was always active in the community serving as a City Councilman for many years. He was active in his church and the Powder Springs School systems. He was also a long time and active member of the Seven SpringsHistorical Society and the Seven Springs Museum.

George Landers (1886-1987) was a farmer and the son of M.A.J.Landers (1865-1954) and Frances E. Landers (1865-1916). He lived on the corner of Atlanta Street and Marchman Street. In 1985, the City purchased Mr. Landers home and moved it to the Park on Brownsville Road and rebuilt it as a cabin for the Seven Springs Museum. The Museum remained there for thirty years.

In 2014, the City of Powder Springs purchased the home from the Bodiford Estate and renovated it to house the Seven Springs Museum. In October of 2015, the home opened as the Seven Springs Museum at the Bodiford House. The artifacts that were housed at the old Museum that was located in the Park on Brownsville Road, were now in a new home preserving the history of Powder Springs for everyone to enjoy.

There is also a marker for military service in memory of Hugh D. Hudson (1914-1943), Veteran of WWII, who died on the Island of Corsica in the line of duty. He was the son of Fred and Bertha Hudson.

There are memorial markers throughout the cemetery honoring the lives and families of those buried here in their final resting place. There are also markers honoring the memory of those who, for some reason, could not actually be buried here.

All those buried here have, through their lives, in some way, helped make their communities a better place to live for everyone.

The Powder Springs City Cemetery has approximately 1700 graves. There is still room for other family members and possibly other future burials today in 2019.

The Powder Springs City Cemetery is maintained by the Powder Springs Cemetery Association which was incorporated as a non-profit organization in 1989. Frank Moon, Jr. was the original worker to get this group working to provide perpetual care for this cemetery and the Methodist Cemetery. 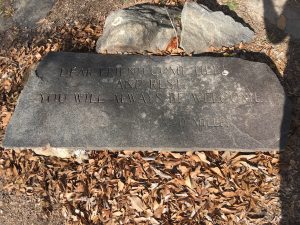