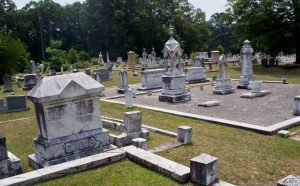 The Methodist Cemetery was established in 1847 and is located on the east side of Old Austell Road approximately one mile from historic downtown Powder Springs. It is sometimes referred to as the “old cemetery” and often confused with the neighboring cemeteries across the street – Powder Springs City Cemetery and the Powder Springs Memorial Gardens Cemetery.

The earliest marked burial is dated 1847 and is that of Samuel Cobb Scott born 1776. Samuel was a Captain in the war of 1812 from Abbeville, S.C. He and his wife Jane (who died 1866) are buried at the rear of the cemetery near the wood line that separates the cemetery from the shopping center. Their graves are sunken and marked with field stones. There are also some unmarked graves.

The Church was officially organized in 1844 and a frame building was constructed on the lot where the present church sets. This land was given by Johnathan Lindley, Jr. (1808-1868), also a charter member.

There are graves at the very back of the cemetery in the woods that are said to be those of slaves. At one time they were marked with field stones.

T. N. (Thomas Newell Lindley) (1858-1937) became Undertaker and owner of the funeral home in 1899 when Uriah Matthews sold the business to him. Mr. Lindley had a store and bookstore with a casket room on the back of this business in downtown. At his death, his grandson Pick Lindley took over the funeral home business.

Seaborn Epperson (S.E.) Smith (1871-1940) was the depot agent for the Southern Railway Depot. In 1923 he was also the President of the Bank of Powder Springs. He has a “Woodman of the World” marker. John L. Calloway (1865-1888) and Lindley Murray (1869-1889) both worked for the East Tennessee, Virginia, and Georgia Railroad. Both men were crushed between railway cars in accidents and killed.

John A. Lewis (1853-1926) owned one of the cotton gins in town and built the two story brick building downtown around 1900, that is referred to as The Lewis Building.

William LaFayette Florence (1873-1949) wife Agnes Lindley (1875-1927) His first job was on the East Tennessee, Virginia And Georgia Railroad as a Conductor. Mr. Florence also was the owner of W. L. Florence Construction Company. In 1941, he and his company graded, created and built Rickenbacker Air Field and Highway 41 from Marietta to Atlanta. In 1942 this airfield then became part of the Marietta Aircraft Plant which was Bell Aircraft and better known as the “Bell Bomber Plant”. The air field was later shared by Bell’s successor Lockheed-Martin and Dobbins Air Force Base and the Naval Air Station of Atlanta. His company also built many of the access roads for the plant as well as the railroad underpass. Mr. Florence was also a farmer in Powder Springs where he raised various crops and cattle. Florence Road was named for him and his farm which was where the farm was located.

Francis C. House (1825-1883) was member of Atlanta City Council but resigned in April of 1861 to join the Confederate Army. A few years after the war, Mr. House moved to Powder Springs where he purchased a lot with two buildings at the back of the property in downtown Powder Springs. The two existing building were originally used as a Wells Fargo Way Station, stables and blacksmith shops as early the 1830’s. Mr. House then built the front part of the building facing Marietta Street which he used for his carpentry business. His sons continued to use the back parts as blacksmith’s shops. This is the current Country Store building.

On the far right side of the cemetery is a grave that sits alone. The marker is a mid-sized tombstone topped with a carving of a parachute that reads: Reo Flock Russell, June 19, 1909 – Nov 2, 1936. Reo Flock was a ‘barnstormer’ during the 1920’s and 1930’s. She was a trick airplane performer, stunt parachutist, as well as an expert Skeet Shooter. Reo loved the landscape of Powder Springs from the air, which was part of the flight pattern for airplanes at that time. It is said that this is the reason Reo wanted to be buried here.

Sarah Frances Miller (1918-2002) was a Powder Springs Historian whose family were long time residences of the Powder Springs community. She was an educator for over 35 years in Cobb County; a charter member and President of the Seven Springs Historical Society; the Historian of the Mimosa Garden Club; one of the historians of the First Baptist Church and charter member of and Co-Secretary and Treasurer of the Powder Springs Senior Center. Miss Miller was the driving force behind the creation of the Seven Springs Museum where she served as President and curator for many years. She also co-authored the cookbook “Seven Springs Sampler” which is a history of Powder Springs with drawings of some the older homes along with recipes plus information about herbs. Miss Miller was also named the South Cobb Citizen of the Year on May 21, 1992 by the Austell/South Cobb Rotary Club and the South Cobb Division of the Cobb County Chamber of Commerce. She received an award/statue of a bronze Eagle on an American Flag.

There are also numerous Veterans from various wars buried here. These are only a few of those Veterans. A ‘Thank You’ always to all our Veterans no matter when or how they served their country.

There are memorial markers throughout the cemetery honoring the lives and families of those buried here in their final resting place.

The Methodist Cemetery has approximately 900 graves. There is still room for many other graves, even today in 2018.

All those buried here have left our community a better place just by choosing to settle and living their lives here.