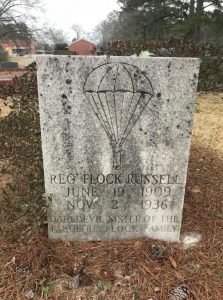 A search began in late 2017 for more information on a curious resident of the Methodist cemetery in Powder Springs, GA. On a mid-sized tombstone topped with a carving of a parachuter reads:

This grave, on the far right side of the cemetery, sits alone as if the family anticipated burying more members alongside Reo. More interesting still is the fact that, judging by the last name of Russell, Reo was apparently married, but still buried alone in a cemetery almost a hundred miles from her hometown of Fort Payne, Alabama. Why? Hearsay from the community agrees that Reo, who was a barnstormer—trick airplane performer—loved the landscape of Powder Springs from the air, and wanted to be buried in the small Western Georgia town. One may think she died performing, as she was only 27 at the time of her death, however, reports are that she suffered from tuberculosis. Apart from a single page on the Encyclopedia of Alabama website*, there isn’t much information on Reo Flock herself, but plenty on her famous brothers, who were early NASCAR racers. In fact, the name “Reo” derived from the REO Motor Car Company. There is a full biography of her family on the EoA website** as well, along with the only known photo of Reo, in which she is hanging from a (grounded) airplane.

Also worthy of mention is Reo’s sister, Ethel Flock, who was included in the book NASCAR: The Complete History by Greg Fielden. On page 19 it states: “A few female drivers, including Sara Christian, Louise Smith, and Ethel Flock, competed alongside with the fellows.” Later, on page 42, there is a captioned photo of Ethel with one of her brothers, and it reads, “Fonty Flock poses with his sister, race car driver Ethel Flock Mobley, before the Oct. 23 Atlanta race. Mobley drove in two Strictly Stock events in ’49, including the Daytona Beach race that has three female drivers in the lineup. Ethel was the wife of Mobley, who fielded modified cars for Tim Flock.” The Encyclopedia of Alabama page related that Ethel moved from women-only races to regular competitions, and even beat two of her brothers in a single race! Her career was short-lived, however, as—according to the EoA—she retired to focus on her family life.

Women in the early to mid-20th century were often regulated to a barely a mention in history, as my sleuthing has proved. In my quest to find more information on the intriguing Reo, I attempted to contact living family members who could vouch for the supposed information, and perhaps offer a more personal account of her life for the records at the Powder Springs Historical Society. Unfortunately, I did not get a response as yet, but have found that a great-niece, Carrie Flock, is a retired boxer. Apparently the Flocks are still producing fierce females!