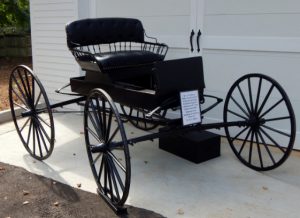 Letters were a way of communicating before the telephone. Post offices were established in each little community for the convenience of the people. We had post offices at Lost Mountain, Upshaw, Brownsville, Moon Station, Storey’s Store and Powder Springs.

Myrtle Kilgore says that there was a post office at Brownsville because she remembers hearing her mother talk about it. The mail came twice a week and they received a paper that was published twice a week.

The Springville (now Powder Springs) post office was established April 11, 1836. An early post office in Powder Springs was in the lobby of the Lindley House Hotel. The office was moved across the street to a small wooden building on the corner where the Pat Mell hardware store is now located.

From there it moved to the spot where Taylor’s Upholstering Company was located in 1964. In 1915, Dave Miller built a marble front building on the north side of Marietta Street for the post office.

In August 1964, the post office was moved to a new building which J. B. McTyre built to lease to the government. This building was built on Pine View Drive.

The Untied States government built a $368,000 facility on Old Austell Road in October 1976. This office is more than five times as large as the old post office on Pine View Drive.

No government service has been more appreciated by the people than the rural free delivery routes. Tom Watson was one man who worked hard to secure this service for the farmers. This service began in 1902. There were four routes going out from the Powder Springs Post Office. The first mail carriers were G. D. Miller, John Hughey, Bud Moon, and Henry Morris.

These men carried their route by walking, riding a bicycle or driving a horse and buggy over the mudyy, unpaved roads. Among others who had later routes were Clem Chandler, Harry C. Miller, Judge Russe Wood Brannon Thomas, Carl Yarbrough, Bob Burkett, Lynn Garmor and Ronald Wolfe.

Before automobiles were used, two of the carriers bought mail wagons. These wagons were enclosed and pulled by a horse. John McKenney had a red wagon and Dave Miller had a green wagon. There was a sign painted on the side that read “Mail Wagon.”

Sewell Kellett told the members of the Ruritan Club to get the houses in town numbered. Once this was done he appealed to Congressman John Davis to get city delivery.

City Mail Delivery began October 28, 1964. Robert Landers and Sewell Kellett were the first city mail carriers. When Robert retired because of a disability, Manning Hatcher took hisp lace. Since that time, Virginia Files, Earl Hammond, Anita Taylor and others have served. We have 26 mail trucks.

Following is a history of post masters and the dates they were appointed.

Papa Was a Mailman

Papa had a mail wagon. It had a window in the front that was hinged at the top. It could be pulled up and tied in the summer. In the winter, the window was pulled down and locked in place. There were two holes in the bottom of the window frame. This was for the lines or reins used to control the horse.

Both sides has sliding glass windows to open to deliver the mail. There was a small heater in the wagon until the mail carriers carried parcels. Then they used metal foot warmers with heated soapstone briquettes which were put in a tray in the carpet-covered metal box.

My Saturday job was to grease the four wheels and the fifth one also–the fifth wheel was really the turning axle.

Horse power was important on his twenty mile route. This was Route Number 3 from the Powder Springs Post Office. He traded horses often. He traded with the Irish horse traders who camped at the spring in the City Park. He even bought several from the Atlanta Fire Department. These horses would run if they heard a bell. George heard a bell at the New Hope Church and made a fast mile and a half to town.

Papa used three horses. Every third day, one of the horses remained at home to rest. He changed horses every day at the halfway point–his farm. The fresh horse enabled him to pick up or maintain his speed.

Rainy off days were harness repair days. He had his own repair kit–punches, brads and a hand bradding machine.

He drove his horse and buggy in the summer and the mail wagon in the winter for about 25 years.

For about five years he had a driver for his Model T Ford automobile to take him around his route. Various ones chauffeured him–Earl McKinney, Clyde Spratlin and Jake Miller.

His son, Jake, hurried off one day, sliding into mailboxes and then speeding up. Papa said, “You are going to turn us over if you don’t slow down.” Finally when they were about one and a half miles from home Papa took the spark and the throttle and held them together. So they really came in fast weaving from side to side of the road. Jake was frightened. He was afraid they would turn over.

The postman doctored his own horses. Onion tea was given for the colic. He cut up onions in a two gallon galvanized bucket, added water and boiled it about thirty minutes. He poured the tea in a long neck whisky bottle.

He put a halter on the horse and pulled the horse’s head up as high as he could get it over a rafter in the barn. Then he put the quart bottle in the horse’s mouth and rubbed his throat so he would swallow. The horse would baptize him with about half the potion.